Iriel is known for her looks, long golden blonde hair that falls past her shoulders and shimmers witht he sunshine giving it that unrealistic look, her skin is pale and healthy complexion , big blue sky icy blue eyes with a dim arcane hue making them very hard to miss when you look and speak to her. Her body is of someone who has trained herself for speed and flexible combat not for strengh, her frame is thin and small making her look and feel very light, she has small curves to define her femenine body, and proud of her cleveage sometimes she has not to much just the right size.

When Iriel was found in Andorhal as a toddler she was meek, scared and highly deffenssive very fearfull, as years progressed she has become, overconfident, cocky known for her smugness and smartass coments. Known for her bossy nature and stuborness. While Iriel despise her tough girl act she is someone who really cares for others and will put a lot of effort to help despise her not recognising such acts. Extremmely cunning, she listens to everything even she will acts different ways to create a reaction so in time she can study these around and recieve the information she needs.  She is very overprotective of her friends. Some may know her slight fetish and immediate change of personality when she seens a furry ear or to close. She can easily switch her mind to cold blooded and unatached. If Necessary. Its completely selfless...and highly misschivious. She would give her life for her friends and family

Iriel was born in Quel'thalas to what is believed to be around more or less three quarters of a hundred years ago, herself barely remembers the lands she grew up on her earlier years, she does remember the warm air and the sweet smell of the city and forest around it, the golden and reddish leafs and the magic in the air.. the breathtaking skies that covered, she seemed not to remember either parents or siblings as she was found at the age of twenty (4-5 in human years) in the human town of Andorhal, unable to speak or understand common looking exhausted, scared and like she didn't drink or eat properly for days..

It wasn't look as a couple tried to calm her down and offer her a home and food for the moment until they could find the reason she was left there or find her family, but it never happened the only sign the elven toddler shown was horrible nightmares and screams of something that haunted her mind during her sleep. Such was suppressed so the elven toddler could have a more or less normal childhood, the couple first took guardianship of the child and later on adopted her seeing no one claimed parenthood of the child.

They gave her the name of Iriel, wanting to keep the child true to her blood since she was going to be raised by humans, she would never lose the fact that she was a Quel'dorei...

Years passed but her aging was quite slow compared, so she still was a young child. Iriel started to gain confidence and start to smile again even started to mimic Arenfel's then task , trying to copy him she once tried his armor but due to her childish short stature with armor on, the seemed more of an arcane guardian in a smaller scale, so it was decided that slowly he would teach her skills firstly to manage a wooden sword which was twice the size of her, magic would come later despise it was clearly already in her blood. Iriel learned much from Arenfel and Catherine, for her Catherine was someone sweet and kind but at the same someone with attitude and strength and Arenfel was also someone she looked up to, in years short Naz'aya came into the family due to being human her skill also grew faster and Iriel who ages slower and yet her mind was older than what she appeared couldn't help but feel that she dissapointed due not to show progress in her magical ability like others, despise a natural clear skill for combat...also it was clear to see she often forgot she was not human by her attitude. Secretly, but not secret for long she started to browse for books of plants and alchemy seeing that alchemy could also sometimes create a sort of substitute for magic, in personal seek to be acknowledged which is something she always seeks. Her secret about studying alchemy was obvious when she started to play with experiments of her own, sometimes filling a room with smoke, making herself sleepy or drowsy or even causing small scale explosions. Despise the trouble she was let to continue her Alchemy studies as her knowledge succeeded that of her Arcane studies at the time. Becoming close friends also with Arenfel's students like Crowley and Vaell. 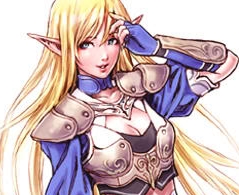 She also looked up to Naz'aya that for her it was her sister, she was always smart and in control and even she back then helped Iriel with her problems even with some advice. Iriel took quite harsh when Naz'aya went under the path of corruption but as many times she never shared her emotions and kept it to herself, to this date she thinks theres a chance to still recover Naz'aya.. despise her anger with her she still cares for her sister.

Shortly after Naz'aya's chaotic departure, Iriel started to really press on her studies with the Arcane, still quite young due to her elven blood. It was thought that the correct Arcane path for her was combat to become more or less a combat magi, someone not ranged but someone who used the arcane to support her combat. The use of manablades was tried on her but the first times shown to be catastrophic, by almost blowing up and freezing a quarter of the courtyard close to giving herself frostbite, despise such it was clear that someday with training she would be capable of wielding one of her own.

Years after, Iriel asked Arenfel to let her leave Dalaran and go to Stormwind to meet the many races of the Alliance to even become a guardian of the Alliance very much like her was years ago, to fight crime, to fight wars, to protect honor. To someone of her own name. Very much so her pleas were denied due to the fact she was still young, but Arenfel after weeks of argument her allowed her with the condition she would continue her studies as an Arcanist. Her path to Stormwind began she addoped an illusion on her as a half elf, and changed her name as Irene and humanized version of her name Iriel and the surname of Silversong a mix of Silvermoon and Eversong, and yet her path towards honor and her life in Stormwind didn't go well to this point she heard of the evil in the world even seen what corruption did to Naz'aya but evil or corruption comes in shapes and forms she was not aware of and her first months in Stormwind didn't go quite as plan, she ended on a Thief and Assassin brotherhood, calling themselves 'The Dark Rose', the leaders claimed they fought against the selfishness of the rich who didn't listen to the people of they're kingdom and its surrounds, the acts they send Iriel was to steal or scare others for the money who supposedly was to buy food and clothes to these who couldn't. As months passed, she got to know the people of the city starting by the guards she many times trouble and spend time in the cells with then the Mercenaries who she often hanged out with, this with the The Dark Rose started to darken they're tasks started to shed much blood which in time Iriel began to feel uncomfortable with something wasn't quite right, and yet for while confused on what she should do she embraced it, and became head of the unit of assassins and thiefs quite close to the Brotherhood bosses,the fact that she was quite good at her task gave her confidence and show that she was the best and wouldn't let anyone take that from her, for a while forgetting the fact something really shady aside from the obvious was with the Dark Rose . She did horrible a thing to a close friend believing he was there to take her spot due only because the bosses praised him and not her for a week, she stabbed him and left him to die, the truth was it was all manipulated by the bosses of the Dark Rose, it was shortly after when Irene (Iriel) found out the true face of the Dark Rose, it was Coven non the less and most them were lied to clear the path for they're cultist means, Iriel felt so betrayed and angry even to herself she went on a rampage, fighting many members of the Coven of the Black Rose, to hiding from them, attacking these she spotted, but it was obvious she could not take on a Coven on her own. There was only one way, to fight and do the right thing...So she went to the guard and explained everything about the Coven, betraying everyone in it. As she was left with a choice, to join the guard and redeem her criminal path or to go on the run and continue to one day end up like them. Of course she never fully declared her actions and within one day she joined the Stormwind Regiment, it clear that many members didn't trust her but she had decided that she would clear and do as much more good she did evil, it was time to start from zero. But she didn't drop her illusion to much later she kept the name of Irene Silversong and the half elf look, for much later. (will be continued)

Things you may know about this Character:Edit

Things you may NOT know about this Character:Edit

Retrieved from "https://defiaseu.fandom.com/wiki/Iriel_Silversong?oldid=17759"
Community content is available under CC-BY-SA unless otherwise noted.